With over three billion internet users around the globe totaling roughly 40% of the population, the internet is rife with opportunities for hackers to steal users’ information. And with technology constantly evolving and the internet growing, it’s not likely to get safer anytime soon. It therefore pays to take extra precautions when surfing the web. We’ve compiled these three easy tips that can amp up your online security.

Short for Hypertext Transfer Protocol Secure, HTTPS indicates that a website has an extra layer of security for its users. This layer encrypts data exchanged between a user’s browser and the web server that delivers the data that the user requests. To use a simpler comparison, imagine someone tapping your landline, but instead of getting to listen in on your conversations, they’ll hear people speaking in tongues instead.

In August 2014, Google Chrome, the world’s most popular browser, announced that having HTTPS makes your website rank higher in its search algorithm. And since October 2017, the browser began flagging non-HTTPS websites as not secure whenever users try to fill out something as simple as a contact form on it. In July 2018, Chrome started showing a “not secure” warning on any website that does not implement HTTPS, whether or not users are filling out a form there.

Because of Google’s measures, the security protocol has been widely adopted. Even if your website does not contain or ask for sensitive information, implementing HTTPS on it engenders trust and a sense of security among internet users, while staying left behind security-wise will make web visitors abandon or avoid you sooner or later.

Since account credentials can be easily stolen via phishing attacks, username and password combos are no longer enough to keep bad actors at bay. To ensure that the one accessing an account is truly that account’s owner, additional identity authentication steps must be implemented.

These steps can involve the use of the account holder’s device — the one logging in must first verify their phone number, receive a one-time password on their smartphone, then enter that code in the access portal before the validity of the code lapses. Alternatively, MFA may ask for a face, retina, voice, or fingerprint scan for authentication. MFA can be a bit of a hassle for your internal and external users, but a little inconvenience is a small price to pay for immensely effective cybersecurity.

Did you know that dated versions of browsers, operating systems (OSs), and even other software packages can create an easy entry point for hackers? Often, new updates are created specifically to fix security holes. And hackers are ever aware that people can be lazy, saving that update for another day that never seems to come. They’ll often try to take advantage of this, searching for outdated devices to infiltrate while their victims watch YouTube on last year’s version of Firefox.

Yes, installing an update might take 15 minutes of your time. But it can pay dividends in preventing a security breach that could cost you or your business thousands.

Looking for more tips to boost your internet security? Get in touch to find out how we can help. 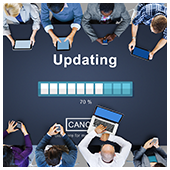 One of the issues that face most users of Microsoft’s latest operating system platform is the amount of time and processing power required to perform Windows 10 updates. This issue causes problems both for businesses and individual users alike, because the newest Windows operating system processes these updates automatically. However, Microsoft has come up with a solution to the slow-update problem, and it may actually save you a great deal of frustration.

What Microsoft is proposing to streamline for the Windows 10 update process is a system known as a UUP or a Unified Update Platform. A Unified Update Platform is essentially a large series of changes to Windows 10, all of which occur behind-the-scenes and will not affect overall user experience. These changes will work to reduce the amount of processing power required to update Windows as well as make the updates move faster for Windows 10 users who need to keep things moving along quickly.

This UUP ambition will be accomplished in a number of ways, including significantly shrinking the size of the update files for all devices, and especially, making the Windows phone update process much more streamlined than it currently is. One of the ways Microsoft proposes to streamline and speed up the update process is by sending updates that are device-specific rather than distributing a full bundle of updates together, some of which are not necessary for the device in question.

Currently, Windows 10 updates essentially overhaul the entire version of Windows 10 that users have on their device. This makes the update process easier on Microsoft, but not on users. Instead of this system, the UUP will eventually allow updates to occur only to the specific programs and systems that need updating, leaving the rest of the operating system untouched. Larger system-wide updates will also be much faster and more efficient with the UUP system in place.

Should you have further questions about what this new Windows 10 update process could mean for you and your business, contact us as soon as possible. We can help you with all your operating system needs.