Is a Chromebook right for your business? 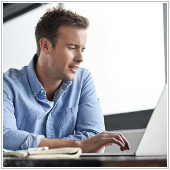 The Chromebook has been on the market since 2011. While back then many people scoffed at the idea of buying a laptop made predominantly for internet use, with the rise of cloud computing these days, it now looks like more of a viable option for businesses. So how do you know whether or not a Google Chromebook is right for your organization? Well, it all depends on your unique needs and circumstances. Let’s have a look.

Buy a Chromebook if you…

Are on a budget: With a range of models available between the prices of $199-$500, Chromebooks are incredibly affordable. That is far cheaper than any Apple laptop and more competitively priced than most PC offerings. So if budget is a concern, then consider a Chromebook.

Want a high-powered laptop: Just because Chromebooks are affordable, doesn’t mean they’re of less quality. In fact many Chromebook features are better or on par with their PC and Apple counterparts. Here are a few notable ones worth mentioning.

Are mobile and heavily internet reliant – With its long battery life, light weight and internet-friendliness, the Chromebook is perfect for the mobile workforce who need an easy to carry laptop to use primarily for staying connected to their employer’s business while away. Better yet, if your business is integrated with Google Apps for Work, you and your staff can even create documents and access your business’s data with a Chromebook.

Avoid a Chromebook if you…

Work mostly without an internet connection – We’ve mentioned it several times already, but it’s worth mentioning again, DO NOT buy a Chromebook if most of your work is done offline. Even if you bought an entry-level Chromebook for $200 and feel like you got a great deal, it will be a useless piece of metal if you need it to complete offline work.

Are a Microsoft junkie – If you are heavily reliant on Microsoft products you may want to look elsewhere for a laptop. Google promotes the use of its own online suite of Office-like applications. And while they are similar to Microsoft products, they do lack some of the features you may love.

For those still on the fence about whether or not a Chromebook is the right choice for their business, it’s also worth noting that just last month Google announced they’ll be adding Android apps to Chromebooks. So if you’re already an Android phone or tablet user, later this year you’ll be able to use those same apps on your Chromebook.

Want to know more about Chromebooks and other laptop options? Our experts are here to help you make an educated purchase. Call us today, and we’ll be happy to share our wealth of information.