5 predictions for web services in 2017 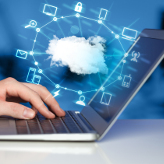 The crystal ball certainly won’t be making an appearance anytime soon, so it’s time to start preparing for the far more realistic technology trends of the coming year. Investing in the right technology could be the thing that sets you apart from your competitors in the coming year, and all it takes is a little research and education. Until someone invents a crystal ball, you’re stuck with our professional projections on the state of web services in 2017.

#1 On-premises servers will survive another year

Cloud adoption will most likely continue its stellar rise, but that doesn’t mean it will be hard to find affordable service for your in-house server or data center. Based on a recent survey of companies that utilize cloud services, nearly half will continue operating some sort of on-site data management in response to perceptions of security or compliance concerns. We may not believe those worries are well-founded, but that does mean hybrid clouds will continue to be a popular option.

Because machine learning requires so much data and processing power to solve everyday problems, an increase in cloud services and vendors in 2017 will also mean an increase in machine learning. But “AI” is so 2016, and consumers will soon tire of it. If you’re selling a service that utilizes this technology, you might want to rebrand it. And if you’re looking to use it internally, definitely don’t pay 2016 prices.

#3 Voice commands will get better

With the proliferation of cloud computing and high-speed internet connections, analyzing voice commands is much easier than when it took place in localized environments after hours of training software to recognize your speech patterns.

Although better voice command technology may not mean much for running a business, big vendors like Amazon releasing development kits and application program interfaces does mean you have the opportunity to make your products and services more accessible via popular consumer technology such as Alexa.

#4 The Internet of Things (IoT) hasn’t peaked yet

Marketing experts are just as certain that consumers are feeling oversaturated with references to machine learning as they are that IoT hasn’t yet reached its full buzzword potential. If prices of connected devices come down, and their functionality improves, you can bet “IoT” will be one of the most profitable keywords of the year. If this technology doesn’t integrate with your products or services, there’s significant potential for its rise to stardom to make in-house business automation a whole lot better.

#5 Containers won’t just be a fad

As a subset of virtualized computing, containers unshackle applications from the constraints of single operating system compatibility. And with several vendors jumping into the market in late 2016 (such as Amazon Web Services), it’s a trend that we’re fairly confident will grow next year.

The market for web services may seem too fickle to gamble on, but as a small business owner, you don’t have much of a choice. Technology is essential to reaching new customers, operating efficiently, and remaining competitive with your business rivals. If you’re ready to start the new year with a new outlook on these technologies, call us today.